Every long-running show has its misfires. It’s unavoidable. And for a show like South Park that constantly swings for the fences, even a .400 batting average is remarkable. South Park usually averages one or two misfires a season (the tedious “Manbearpig” comes to mind), but the clinkers have always been redeemed by epic episodes like the three-part “Imaginationland”.

The best thing you can say for “Tonsil Trouble” is that it would have played better in season 7 or 8. Cartman gets AIDS from a blood transfusion, and then he infects an unsympathetic Kyle. The jokes are half-hearted — “I’m not just sure, I’m HIV-Positive” — and don’t cut deeply on any given issue. The humor suffers from A.D.D., alluding to AIDS losing status as a cause-celebre, unfair adults, dimwitted scientists, Magic Johnson, and the expensive price of a cure, without digging deeply into any of them. 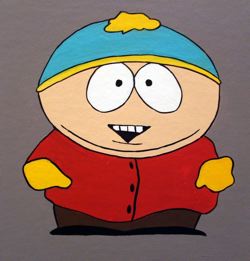 As the episode wound down, I found myself hoping for a “to be continued”, or that they would leave Cartman and Kyle infected with AIDS for a good chunk of the season. For a show that routinely kills off one main character and sex-changed another, a running theme of infectious disease is not beyond the bounds. Also, given the contentious nature of Cartman and Kyle’s relationship, there might be some interesting comic potential to have them tied together so intimately. Unfortunately, the show copped out and cured them with a half-hearted deus ex machina.

Like Kubrick’s satire, the best South Parks fearlessly push their central gag to an illogical extreme, bending the world we know until it reaches the breaking point. Last season’s scatological laceration of Bono savaged his self-serving and condescending “save the Africans” stance in an unforgettably surreal manner. And the “24” parody was sublime – mocking current television cliches and politics in one brilliant package. “Tonsil Trouble”, by comparison, is a weak attempt to be offensive that would have been funnier four or five years ago.

Still, even when it misfires, South Park is still funnier than most shows on television. New episodes run on Comedy Central every Wednesday for the next seven weeks, and it’s safe to expect better as the season unfolds.

Also worth noting – for the first time in memory, I finally have a three-way TiVo conflict. “Law And Order”, “Top Chef” and “South Park” all run on Wednesday at 10:00 PM. All three are worthy shows (more on this later), and thankfully Comedy Central re-runs “South Park” ad nauseum, making it easy to catch up on a missed episode.