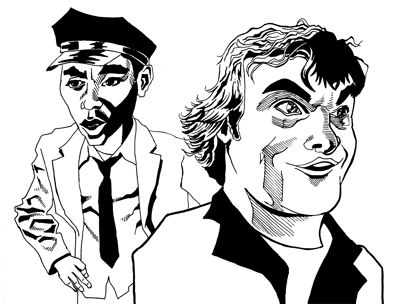 Be Kind, Rewind is the cinematic equivalent of a letter to Santa Claus. It’s an extended, naive fantasia; brimming over with good-natured longing but it’s also as insubstantial as that North Pole address.

The film is centered around a ramshackle video store in Passaic, New Jersey; ostensibly the birthplace of jazz great Fats Waller. The store exists in a fairy-tale state of disrepair; with aged VHS tapes, a 12 inch television, and $1 rentals. Around the corner is a video mega-store, with infinitely repetitive DVD titles and projection televisions. A condo developer circles like a vulture, eager to foreclose and build a string of anonymous condos. That fate isn’t far off, as business is so bad that the newest title in stock seems to be 2002’s Rush Hour 2.

There’s a forced air of ‘nobility through poverty’ that suffuses the film; we’re supposed to like these guys because they’re the poor, independently owned shop about to be destroyed by the evils of modernization. Unfortunately, the characters don’t add much credibility to the story. Mike (played by Mos Def) freaks out when his paranoid-conspiracy loving buddy Jerry (Jack Black) accidentally erases all the videotapes in the store. To save the store, they produce their own hand-made versions of the films their few remaining customers want to rent – a process they elliptically define as ‘sweding’. Neither man is particularly well-defined, though. Mos Def tries to stammer his way to something emotionally solid without much success, and Black’s one-note shtick has finally worn thin.

Sweding is what Be Kind, Rewind is really all about, and the misfires of that central gimmick are what keep the film from taking flight. Watching two semi-loveable losers attempt handmade, camcorder versions of Hollywood spectacles sounds magical, and in thin-sliced moments, it comes close. Buried somewhere under all the cloying cuteness is a pointed jab at the budgetary excess of mainstream Hollywood pictures, and perhaps a meta-critical commentary on the individual’s imagination being more profound than the professional’s. The Ghostbusters recreation is charming, with tinsel-lasers and cardboard box televisions, and it offers up promise for what’s to come. Unfortunately, the rest of the sweded versions – and the film itself – disappoint.

The writer/director Michel Gondry is famous for achieving big-budget impact with low-budget effects. He got his start directing strikingly playful videos for Bjork and the White Stripes. He released a viral video purporting to show himself solving a Rubik’s cube in record time using only his feet, which was actually footage of him scrambling a solved cube played in reverse. It’s clever – almost too clever by half. It’s that cleverness, though, that’s missing from Be Kind, Rewind; here it is trumped by the groundles starry-eyed optimism of a “hey kids, let’s put on a show!” ethic.

There’s a magical promise in the way Gondry’s imagination works, but it is also riddled with shortcomings. He lacks the discipline to shape his ideas into an emotionally engaging story. Watching 5 minutes of the sweded Ghostbusters on You Tube streaming video would be just as effective as watching all 100 minutes of Be Kind, Rewind on a 20 foot screen.

The money shot in Be Kind, Rewind is an expensive single-take montaging of sweded images from King Kong, Ali, Men In Black, and others. Wait for that to hit You Tube, and you’ll be impressed with how much cleverness is packed into every frame. Watching it in context is more dizzying than entertaining. It rushes past like an avalanche, and the measured pace of the film goes manic for thirty seconds as the gags blur past in an overwhelming flurry. There’s no chance to appreciate or truly laugh at his re-creations because of the velocity. It’s cute to see Jack Black and Mos Def recreating famous images, but the cleverness just leads to self-congratulatory nostalgia – a brief rush of “hey, I remember seeing that!” Instead of connecting with the images or summoning the feeling of why the original film mattered, you’re just picking apart how the low-tech simulation was achieved. It’s photo-copier pop art, lacking any true connection with the original.

Gondry is also cheatinG with his parodies, just cherry-picking moments that New Line could get cleared. After Ghostbusters, none of the sweded re-makes give you any sense of the source film. Instead of summoning the magic of the famous original, Gondry setlles for re-drawing the poster with crayons. That’s an easy way out, and reduces his sweded movies to irrelevant parodies instead of true homage. It’s also more than a little disingenuous to celebrate the local and handmade with a multi-million dollar facsimile.

Be Kind, Rewind is amusing, but much less than the sum of its parts. It’s cute enough to make you wish for more, and clever enough to disappoint you when there isn’t. There’s a moment, though, at the end of the film, where the audience stares with rapt attention at the screen. The joy in those faces, bathed in the flickering light of the screen, perfectly captures the magic of the movies. It’s as low-tech and understated as an image can get, yet it’s more powerful than all the noisy scampering that has preceded it.

There’s a real-life example of sweding that’s far more engaging than anything in Be Kind, Rewind. Between 1982 and 1989, two boys in Mississippi spent most of their teenage years shooting a shot-for-shot re-creation of Raiders Of The Lost Ark.

All the heart, humor, and passion that drifts aimlessly through Be Kind, Rewind comes to life in the story of this backyard epic. Copyright issues mean that their finished film rarely sees the light of day, but it’s worthy of a movie all its own.

To tell more is to spoil it, but if that feeling of lightweight disappointment from all the missed potential in Be Kind, Rewind is lingering, this story will have you standing up and cheering. Jim Windolf’s telling of the tale in a 2004 Vanity Fair is a must-read.

Raiders Of The Lost Backyard