So you’re not Jewish, and you’re not from the midwest. You were born after 1970, and you don’t care for Jefferson Airplane. Despite the fact that A Serious Man is constructed almost entirely from those elements, it’s one of the most engaging and thought provoking (in its own oblique way) films of the year. Don’t let the seemingly small scale or odd period-piece nature of the film put you off, this is one of the most engaging and thought-provoking films of the year. 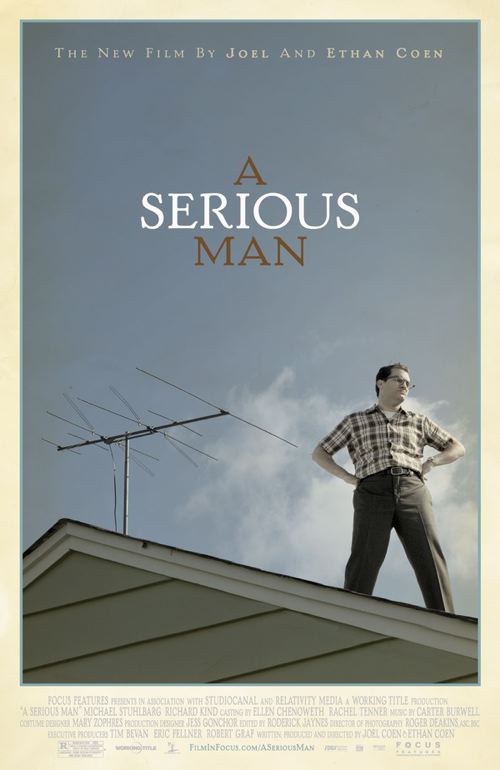 In fact, except for The Hurt Locker, there wasn’t another movie I saw all year that lingered in my thoughts the way A Serious Man did. It’s one part Barton Fink and one part The Big Lebowski, and a wholly original creation. It’s the story of Larry Gopnik – a physics professor and a family man. All his life, he’s tried to be a mensch, and suddenly in middle age, his whole world is falling apart. His tenure is threatened. His wife wants a divorce. His wife’s lover wants Larry to move out. His daughter is stealing money from his wallet. His son is only interested in getting high and watching TV. His neighbor may or may not be trying to seduce him. And one of his students may or may not be bribing him for a better grade.

Larry wants to be a good man, a serious man. Since he’s also a religious man, he turns to a succession of rabbis to help him understand the trials that Hashem (the Hebrew term for G-d) is placing before him.

A Serious Man is the first comedy that’s equally inspired by the biblical Book of Job and the paradox of Schroedinger’s Cat. It’s either the most whimsical movie to ponder the relationship between mankind and the Almighty, or it’s the grimmest comedy ever made. The stroke of genius here is that is it simultaneously both of those things, and neither of them.

The story of Job is an attempt to present the quandry of why bad things happen to good people. It’s a parable meant to help people contemplate the paradox of having faith even when the evidence contradicts it. The thought experiment of Schroedinger’s Cat is even more maddening in its insistence that reality exists in contradictory states all the time. The way the Coen brothers combine the two, a stream of profound, and profoundly unanswerable questions flows forth. Is G-d out there, watching over us? Does he care? Do our good works appease him? Or do they make no difference? For that matter, what is goodness? Is it good to suffer if G-d commands? Or does G-d not even notice?

Movies by the Coens usually traffic in some levels of ‘unknowability.’ Some of their strongest detractors always hammer away at the aloof and elusive nature of their films. I had this complaint about No Country For Old Men:

The Coens create perfect but perfectly airless pieces of cinema. They’re unsympathetic, emotionally distant observers disinterested in sharing their inside jokes with the world at large

And that movie won the Oscar for Best Picture.

A Serious Man is a vastly better film. The Coens’ penchant for cryptic, emotionally distant storytelling finds a perfect subject in the unknowable nature of G-d. The film begins with a ten minute prologue set in a turn-of-last-century Polish shtetl. A husband tells his wife about a man he invited over for dinner. The wife replies in horror that the man died months ago, and the husband invited a demon. When the guest arrives, the wife stabs the man and he stumbles out into the snow never to be seen again. Who is the demon? The wife who stabs a man unprovoked, or the mysterious guest? Was he human? Was he a demon?

That’s the perfection of A Serious Man. Like Schroedinger’s Cat, every trial that Larry faces, every oblique event that the filmmakers present is an embodiment of that paradoxical unknown. Is this a test from G-d? Or is this happening at random? It’s surrealism of the mundane.

The funniest scene in the movie follows Larry’s son at his Bar Mitzvah. After the Torah reading, his son – who is stoned out of his gourd – is granted a brief audience with the wizened, senior Rabbi Marshak who rarely speaks. Larry’s son is suffering from ‘stoner’s paranoia’, and Marshak, an impossibly old man, slowly leans forward to present his precious few words of wisdom. In a gravelly voice, he cryptically intones “When the truth is found… to be lies…” (which are the opening lyrics to Jefferson Airplane’s “Somebody To Love”) while sliding a confiscated transistor radio back to the boy.

Larry’s son stares at the Rabbi with slack-jawed incoherence and gratitude. Is this wisdom from ancient Torah scholars? Is the Rabbi into Jefferson Airplane? Is this what all the hype of becoming a man is about? Is this mystically incomprehensible, or just a polite pat on the head? It’s weird, oblique, almost pointlessly unknowable, and so precisely controlled that it’s hysterically funny.

Everything is a question without an answer, and when you question the question, you only get more questions. The rabbis that Larry turns to for help offer little solace. The junior rabbi is useless. Marshak won’t speak to him. And Rabbi Nachtner only increases the paradoxes with a bizarre tale of G-d possibly planting messages in a goy’s teeth. Larry has to angrily deny that he ordered the Santana album “Abraxas” from the Columbia Record Club, but knowing that Abraxas is a Gnostic term for G-d, is Larry denying that he bought a record, or denying the role of G-d in his life? Which is it? Are the filmmakers presenting clues to the existence of G-d? Or just a massive, improbable set of coincidences?

Movies are a medium for concrete answers, they work best in presenting clearly designed, specific truths. Creating a satisfying film where the very heart of it is an impenetrable non-answer is an incredibly difficult proposition. Very few films achieve this – Lynch’s Lost Highway is probably the most notable, and to a lesser extent so does Kubrick’s Eyes Wide Shut.

That’s appropriate, because with A Serious Man, the Coen Brothers become the first filmmakers to stake a legitimate claim at being Kubrick’s true heirs. It’s unfortunate that the Coen’s won their Best Picture Oscar for the completely inferior No Country For Old Men because A Serious Man is the high water mark of their career to date.

My Tweets
« House Lights
The Big Lebowski, via Shakespeare »