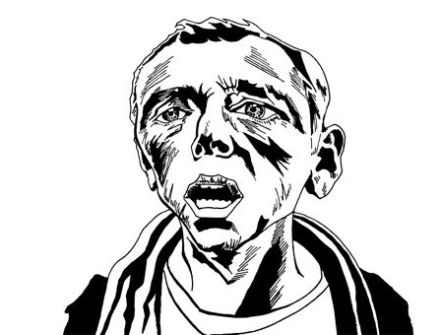 Working with your longtime friends, though, is a much better idea. Simon Pegg, the star of Run Fatboy Run, is an English comic actor and cult film hero. Working with longtime collaborators Nick Frost and Edgar Wright, he has starred in a popular British sitcom (Spaced), and two cult-film successes (Shaun of the Dead and Hot Fuzz), all of which is a fancy way of saying that non-dorky Americans might squint at the screen and vaguely recognize him as a lab tech from Mission Impossible III.

Which is a shame. Heâ€™s a talented comic, and his partnerships with Messrs. Frost and Wright have created a remarkable body of work. Most notably Shaun of the Dead, where the perpetually downtrodden Pegg played a directionless slacker whose sense of ambition awakens on the same day the living dead return to terrorize . The filmâ€™s pitch sounds like a daft parody of zombie movies, but the execution is remarkable â€“ equal parts silly and seriousness, with a robust heart.

For his latest project, Pegg steps aside from his usual collaborators and their replacements arenâ€™t up to the task. Run Fatboy Run is familiar ground for Pegg. Here he plays Dennis, a chain-smoking, directionless slacker who leaves his pregnant fiancÃ©e (Thandie Newton) at the altar. Five years later, with his life firmly stuck in neutral; Dennis is still pining for her. When she takes up with an athletic American stock broker (Hank Azaria) who runs marathons, Dennis decides to run one as well, to win her back.

Itâ€™s no less implausible than last yearâ€™s tedious Knocked Up, but the story moves through a collection of sitcom-lite predicaments rather than weaving together an integrated narrative. Written by Michael Ian Black, who dorky Americans will recognize as the go-to snarky guy for VH1â€™s endless series of I Love The 70â€™s/80â€™s/90â€™s, and directed by David Schwimmer, who could cure cancer and still be primarily remembered as the hangdog Ross from Friends, the television vets stumble over the move to the big screen. This is Schwimmer’s directorial debut, and while it looks like an amusing movie, he fails to connect the dots in a satisfying fashion.

Dennis is an amusing creation, and itâ€™s a testament to Peggâ€™s innate likeability that he can take a spineless twit and make him sympathetic. Hank Azariaâ€™s overgrown frat-boy/jock is cartoonishly broad, and Thandie Newton has little to do but stand around looking pretty and extremely cross at the same time. Thereâ€™s never a sense that any of these people are bound to each other in any way. That the radiant would make the time of day for either suitor simply boggles the imagination.

Running â€“ both as an activity or a metaphor â€“ is used sparingly through the film. What Schwimmerâ€™s sitcom-inflected style never grasps is that running, like maturing or filmmaking, is a cumulative process. Step by step and mile by mile, runners constantly choose to push themselves past their limits.

Feature film making is a marathon process. Every scene, every beat, every step needs to be grounded in an emotion thatâ€™s larger than life and resonates with the audience. It has to work on a deeper, more resonant level than television does. Edgar Wright directed Pegg in Shaun of the Dead with a rigorous discipline. Every scene feeding the next, every joke carrying an increasing amount of tension, and every one of his slackerâ€™s dalliances carrying dire consequences.

Television â€“ especially television comedy â€“ is much more of a sprint, and Schwimmerâ€™s style reflects that. In Run Fatboy Run, nothing is cumulative. The grueling physical nature of running is traded out for sitcom beats and unsatisfying clichÃ©s. Schwimmer chiefly goes for individual laughs in the hope theyâ€™ll add up to something larger. As a result, the story roams wildly through random gags, sitcom moments, and implausible (and consequence-free) coincidence. The end result is more jumbled than sweet, and the attempt at a rousing climax is undercut by the unsteady tone.

In the end, with a perverse bit of narrative sleight-of-hand, Dennis does very little running and disappears off-screen for the bulk of his marathon. While the city of rallies behind him in his mad, quixotic quest; the film, like Dennis, avoids the labor of actually putting the miles in. When it matters most, Run Fatboy Run skips the hard work and fast-forwards to the finish line, which undercuts the whole purpose of the race.

My Tweets
« Death Of A Fucking Salesman
South Park – Canada On Strike! »