I shall title this review Das Weisse Band, with the subtitle “In which we shall discuss the glorious enlightenment that a director of cinema shall bequeath unto an audience, and the manner in which said audience shall receive that most holy golden gift, even if it shall be locked up tightly and largely withheld in any case.”

Das Weisse Band, or as it is grudgingly known in English The White Ribbon is the 2009 Palme D’Or winning film by Michael Haneke, an Austrian filmmaker who’s most notable leitmotif is hostility toward the audience. Whether or not you like his films will boil down to your position on that issue, and quite honestly, if you think that going to the movies should involve some glimmer of entertainment, then stop reading now. Michael Haneke despises you and your gluttonous, popcorn-guzzling ways. If you have a quarrelsome streak, and have a fondness for arguing with the inexplicable, then you’ve just found your Citizen Kane. 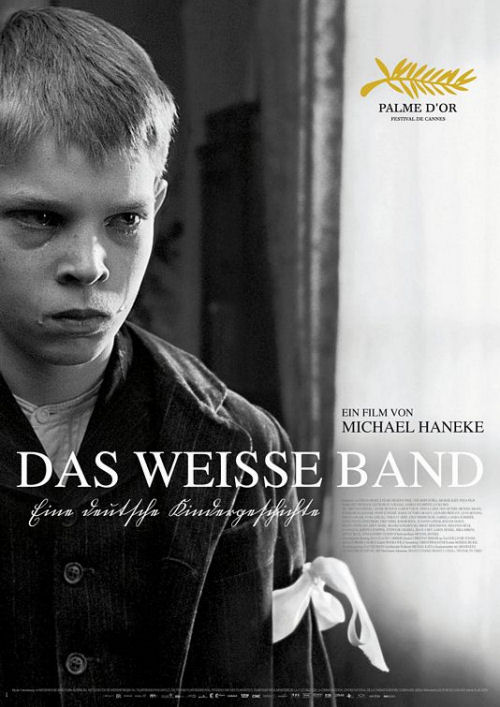 The White Ribbon is set in a small Austrian village on the eve of World War I. A storm is coming, and it appears to begin with a malicious prank. The town doctor thrown from his horse when it gallops into a wire strung across the path. The doctor is thrown off and shatters his collarbone, and the close-knit town can find no motive or suspects. Days later, an accident in the mill begins to reinforce the suspicions and paranoia. Gradually, the idyllic life becomes routinely shattered with inexplicable acts of violence and soon everyone in town – from the Baron and the pastor, to the doctor and the farm workers – are all caught in a growing cloud of darkness.

Who among the villagers is responsible for these deeds? Who is covering them up? Haneke won’t answer those questions, and the film’s power is in its stern refusal to even address them. Evil isn’t the product of a single, discernable event, Haneke seems to be saying, it’s merely part of a grand cycle that passes from generation to generation. And once it takes root, it’s impossible to weed out.

The stark black and white cinematography adds to the air of vaguely defined menace that suffuses the village. The film was originally shot in color and converted to black and white in post-production, which, as many critics have noted, seems to have drained the film of any glimmer of hope. The crisp focus and blown-out highlights film each frame with intense detail and complete opacity. It is meticulous cinematography, every frame is precisely calibrated. The glacial tempo is strictly regulated and the soundtrack is painfully dry. 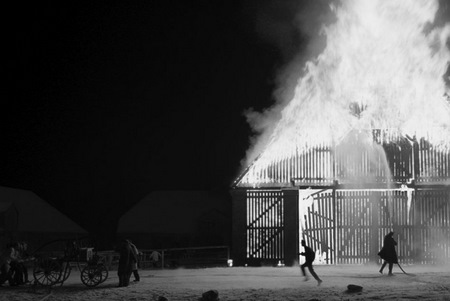 Critics have been enraptured by the film, because it’s the kind of film that appeals almost exclusively to critics. Read Ebert’s thoughts here. Anthony Lane blends a review with a tongue-bath of a profile of Haneke, and thoroughly slobbers over both (New Yorker, October 5, 2009; subscription required).

In Lane’s article, one of the early quotes from Haneke seems to sum up his position as an artist:

“I hate the smell of popcorn. I rarely go to the cinema… The spectators seem to have lost respect for the film.”

A profile in the New York Times magazine for his 2008 film Funny Games reinforces that.

“I’ve been accused of ‘raping’ the audience in my films, and I admit to that freely — all movies assault the viewer in one way or another. What’s different about my films is this: I’m trying to rape the viewer into independence.”

Stay classy, Michael Haneke. His work, however, is an interesting paradox. Countless art school dropouts have attempted to “rape the audience” with their work, but Haneke is one of the few who succeeds in making people ask for it. His films tease and beguile, luring you in with the promise of catharsis and then torturously refuse to deliver. Yet, as audience raping goes, Haneke does a far better and more thorough job than verzogener Fratz like Darren Aronofsky.

Haneke gets away with it because is an exquisite craftsman as a director. His work has a technically precise feel that clutches you by the throat even when the film is meandering through a sunny field. Even his admirers will admit his films are profoundly uncomfortable to sit through, and like any exercise in masochism, it forces to you reflect upon why you’ve just done that to yourself.

If you want answers, this is not a movie for you. The White Ribbon won’t even bother to answer your questions with other questions. Try to probe its mysteries and the film would laugh at your efforts, if it deigned to notice you at all.

Perhaps the film is a Zen koan – a riddle designed to probe the incomprehensible. As an audience member, I found The White Ribbon insulting and tedious. As a critic, I found it tiresome and opaque. Wearing either hat, I wouldn’t recommend that anybody go to see it. But whether it’s a study in arrogance, pomposity, or mundane belligerence, anybody who goes to movies to not enjoy them should make extra effort to seek this out.