David Fincher’s The Girl With The Dragon Tattoo is a terrible bore. 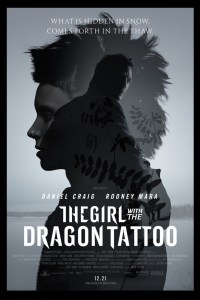 At a running time of two hours and forty minutes, it lasts about as long as I lasted reading the book. My bookmark still sits squeezed in between pages 340 and 341, at the start of chapter 17, where I finally gave up slogging through the Pynchon-ian digressions as I waited for the story to move forward. Pulp fiction is supposed to be lurid; over-salted, fat-filled cheeseburger narratives that leave a grease stain as they roll down your gullet. The story has to keep moving, it’s the basic commandment of the genre. Stieg Larsson’s novel instead flails about like a nervous grad student, so terrified of leaving out a critical fact he goes out of his way to include everything he’s ever learned about a subject. It’s tiresome and badly written, which never stopped his airport rack predecessors Tom Clancy, John Grisham, James Patterson, and Dan Brown from achieving airborne omnipresence and the inevitable movie treatment as well.

The Swedes did it first. The 2009 version of The Girl With The Dragon Tattoo (available on Netflix streaming) gets it right. The script especially was a thing of beauty, bursting with narrative energy; moving with bold and economic strokes that cranked out a satisfying, lurid yarn.

Fincher’s adaptation seems to have almost the same script (would love to see some internet kiddie split-screen the two movies and watch how the playback synchronizes), but he approaches the material with heavy hands and leaden feet. Fincher is a meticulous craftsman, but his approach is like Joel Robuchon recreating a meal at McDonalds, turning big, juicy bites of pulp into tiny morsels of Very Important Filmmaking. There’s a very expensive technical sheen on everything in sight, but the tastiest part of the whole endeavor is the amuse-bouche of the glossy black title sequence. The rest of the film rolls by in blurred succession of flavorless morsels that wears out its welcome long before anything delicious happens.

The story, for Swede-ophodes or my short-tempered brethren who never opened the books, revolves around a disgraced journalist, Mikael Blomquist, hired by a Swedish oligarch, Henrik Vanger, to investigate his missing niece. The titular girl is a pierced, bisexual goth hacker who was much less of a cliché when the books were written pre-2004. After a reciprocal pair of anal rapes, she joins forces with our intrepid journalist to hunt down a serial killer. Despite the marketing promises of lurid, twisted sex, the most compelling parts of the story turn out not to be the notorious perversions, but the long trips to the library and hours spent flipping through photo archives. 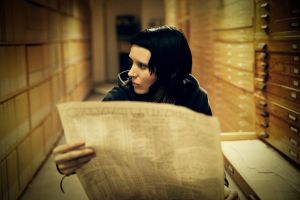 If you’re going to strip the fun out of the narrative, as Fincher does here, you need to replace it with some substance, which he does not. Almost all of the film is pro forma filmmaking, operating as if the collective memory of a million pages turned en route from Denver to Chicago will fill the empty spaces with entertainment. For a story that is more timely now than when it was first released, this is a fatal misstep.

The narrative DNA is a revenge fantasy of the little guy bringing down the 1%, with a hefty dose of religious zealotry and casual hipster bisexuality mixed in for a cheery timelessness. In the era of “Occupy That”, every titan of industry is only a few moustache hairs away from tying a helpless damsel to the train tracks, replacing the Russians and generically turbaned terrorists as cinema’s favored bad guys.

Here, Fincher ignores that dynamic almost entirely. The sharpest edges are the perfectly smooth counter tops in Martin Vanger’s ultra-modern home. (Much of the film, with it’s square panes of glass and smooth lines feels lifted from Nolan’s tedious paean to architectural porn, Inception, so much so that I expected to see Leonardo DiCaprio’s team rappelling down a mountainside in the background on numerous occasions.) Whether it’s from laziness or compulsive obedience to the novel, ice-cold affiliations with the Nazi party hardly quicken the blood. There’s a lonely flash of life in the way a matriarch of the Vanger clan dismisses our proletarian journalist from a hospital waiting room, with her words rolling off an acid tongue sharpened from a lifetime of unearned privilege, that leaves you longing for more.

There must be an ancient Greek word for the boredom that comes from over-stimulation. Until the scholars turn up something better, Fincherism will have to do. Or perhaps Bay-ism, though at least Bay is compulsive about providing adrenalin jolts, even if it is by any shameful means necessary. Fincher flashcards images of symmetrical beauty one after the other, and it takes him over two hours to stumble across a single one that approaches memorable. Instead, he moves the story along at a relentless pace, rushing at every turn, but all his efforts generate negative results. He takes five edits to get Blomquist, played by the doughy cheeks of Daniel Craig, off a train.

2. Wide shot of the train pulling in.

4. Close-up shot of Blomquist for two seconds, then

5. Back to the medium shot as he keeps walking.

The frantic display of coverage adds nothing to the story; the snare-drum snaps of editing serving only as an uptempo metronome, rudely pushing the story along like an impatient dinner date with an early curfew. If the worry or caution in Blomquist’s blue eyes are so important, lingering on them for a pair of seconds is not a substantial enough time to let it register. The sequence could easily have been done with three shots, and a calmer hand might have opted to linger on the close-up of Daniel Craig’s icy blue eyes, and opted out of the sterile traveling shots that follow.

But that’s not Fincher’s style. Instead he prefers to slip through machined, calibrated images like an overstimulated slide show. The only imperative in the story is a rush to get to the next page by any means necessary. The characters are motivated by arbitrary expedience, stumbling through the chilly frames with passions so cool and character so bland that they might be mistaken for another part of the landscape, which, in many senses is all they are. In too many crucial ways, Fincher reduces his characters to two-dimensional ciphers, props to be photographed instead of heroes to be cheered.

Pairing the icy Fincher with material this cold is both lazy thinking and a recipe for disaster. Fincher brings nothing new to the table, except a surfeit of style. I spent a good deal of The Girl With The Dragon Tattoo wanting to know what Lars Von Trier might have brought to the film instead.

After spending much of the last month contemplating Lars Von Trier’s fantastically compelling Melancholia, with it’s damaged heroine, unchecked contempt for the past, and misogyny so reckless it becomes empowering, I left the theater desperately wanting to see his version of Larsson’s story.

As a final PS, this blogger has a fascinating feminist take on the differences between the Swedish and American incarnations of Lisbeth Salander. She is so spot on that even addressing the issue here felt redundant. Very worthwhile, and thought provoking reading.