Frenchman Philippe Petit is a hyperactive Frenchman who’s as self-affirming as a kindergarten teacher; all wide-eyes and excited gestures. He sees an artist’s rendering of the towers in a newspaper while waiting for a filling, and is so smitten that he steals the image and rushes home to begin planning. To him, crossing the towers is an inexplicable poetry, and by the time he is on the wire between the towers, we will come to understand it intimately. 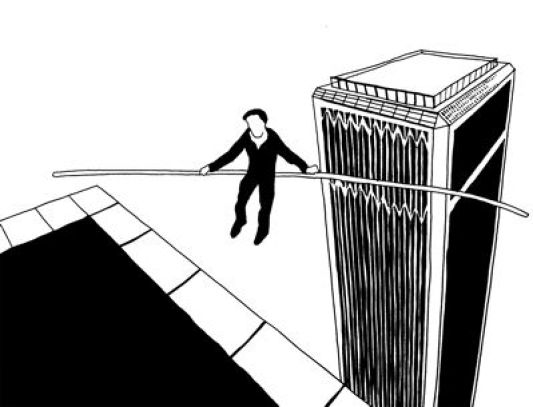 The footage of Petit walking between the spires of Notre Dame and crossing the bridge at Sydney Harbor is incredible. The wire disappears into the film grain, leaving just the shape of a man, floating high overhead. There’s no pretension of being a magic trick, just the incredible grace of a man floating gently in the air. The clean geometry of the still photographs, too, are marvelous. The balancing pole, the wire, and the girders of the World Trade Centers intersect at hard right angles while Petit stands in the center of the axes, triangulating himself into the center of attention.

Making a documentary about an event where the outcome is widely known is a high-wire act unto itself. When the ultimate question of “does he succeed?” can’t be used to generate any drama,Â  most producers and directors plunge into a mode of ponderous examination, pouring pretension onto the smallest details to inflate their subject into legend. The other popular approach is to cast the story as a hand-wringing fight against the odds. Both approaches turn their stories into leaden sculptures, sluggishly miring the action under a microscope as they attempt to pin it down with an exacting examination.

Director James Marsh veers against the grain, framing the story as an Ocean’s 11 style heist flick. The opening is immediately gripping, and he keeps the action constantly aloft. The story sprawls and rambles but never sags. We are mercifully spared any Herzog-ian pronouncements about the metaphoric implications of walking a tightrope, instead we are treated to the dazzling sight of a man walking on thin air. The bulk of the story covers the breathtaking ingenuity it took to conceive, engineer, and execute Petit’s dream. His gambits to recon the towers are laugh out loud funny, and the archive footage of the towers being constructed are a startling reminder of how majestic they were on the New York skyline.

After a summer of grim, Dolby-steroid inflated grindfests, Man On Wire is a welcome change of pace. (The gramatically incorrect title is from the police report after Petit’s arrest – it took the Manhattan D.A. quite some time to figure out what exactly to charge him with.) If you met Petit at a dinner party, you might want to punch his lights out. But in his element, floating in the sky, Petit is an enchanting story teller. Nothing else you’ll see this summer will linger with you quite as long; if this film is playing somewhere near you, go see it.

My Tweets
« Hamlet 2
Fast And Furious – The Trailer »