By Aaron Shay
Itâ€™s rare when a second film in any given franchise is superior to the original. 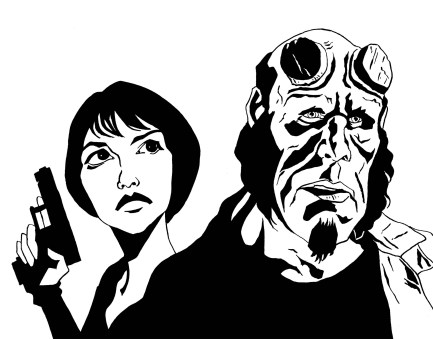 When I got word of Guillermo Del Toro trying again to breathe life into the Hellboy franchise, I was puzzled. The first film was a mediocre attempt to blend Men in Black, The Mummy, and The City of Lost Children. The second film continues the visual mood but structures a story with a more genuinely epic conflict, pitting the world of Myth against the world of Humanity. The film also continues to plum the depths of Hellboyâ€™s character: The first film explored his identity, while this new film explores the demonic heroâ€™s place in Human society by presenting a tempting alternative.

The story: A long, long, time ago, humans were at war with the mythical creatures of the world for control. The mythical creatures, in order to beat the powerful humans, created an army of indestructible soldiers, the titular Golden Army. So merciless were these warriors to cause horror in the King. So he and the humans made a pact: mythical creatures would keep the forests and man would have every other piece of land for themselves. You can see where this is going. So, zoom to the modern day, where the son of the King returns from exile to awaken the Golden Army and exact revenge on humans for breaking the pact. Whoâ€™s going to stop him?

You get three guesses, and the first two donâ€™t count.
The first thing to commend in The Golden Army is Del Toroâ€™s use of puppetry. For this production, he acquired the services of the Jim Henson Shopâ€™s artisans, a move which was vital to the production. At one point, the team of heroes enters a Mos Eisley style bazaar called the Troll Market, featuring many creepy yet intriguing wares and dark, mysterious denizens, such as a man with a miniature castle on his head. Del Toro has come to realize, as many of his viewers have, that costumes and puppets are still more real than computers, so he only uses CGI when necessary, such as when animating an army of seventy times seventy indestructible goblin-made soldiers. He leaves the trolls to be costumed.

Allow me to get the critique out of the way:

1) The human characters were constantly mistreated. At one point, Hellboy saves a baby. Upon handing the baby back, the mother demands, â€œWhat did you do to my baby?â€ A reasonable concern, I suppose, had Hellboy plucked the baby from its carriage. But that was not the case. He rather saved the baby from being crushed by the tentacle of a gigantic Forest Elemental. Having executed the Forest Elemental, the crowd then reacts angrily, near riotous. What? Excuse me, but he just destroyed a five story tree god that would have destroyed a majority of Brooklyn before being put down. And your response is, â€œHellboy is out to get us?â€ Give humans a break, Guillermo.
2) Heavy-handed social commentary. Lots of it. There seems to be a pandemic of this in film in the past few months. We really need to rein this in. Thereâ€™s nothing wrong with social commentary, as long as itâ€™s not beaten into our heads with spiked clubs. The bit on environmentalism was blessedly short, but the unrelenting critique of â€œby the booksâ€ policy was simply too much.

3) They did not explain why the Prince was compelled to come back now, of all times. Why not during the Industrial Revolution, when some of manâ€™s worst crimes against nature occurred, without a hint of remorse? This is a minor complaint: it is ham-handed social commentary, after all.

Having said that, more positive notes. Del Toro challenges the image set by Lord of the Rings by presenting a more mortal, unflattering, imperfect caricature of the Elf. There is a promise of a future film, even with the satisfying conclusion. The action scenes were magnificent, each one a test of Hellboyâ€™s shortfalls. Noticeable plot-holes fixed themselves. Compelling, profound new characters introduced. Not all mysteries were solved, just the important ones. The exposition was brief, sufficient, and presented delightfully from a young Hellboyâ€™s vantage point. Long live Howdy Doody.

If you liked Hellboy, youâ€™ll like The Golden Army even more. If you didnâ€™t like Hellboy, then give the franchise a second chance.
It was worth it to see a drunken amphibious humanoid sing Barry Manilow.