I’ve been chewing it over for the better part of a week (or at least attempting to chew it over – a movie this digitally amplified is so vaporous as to almost refuse mastication), and I’m tempted to upgrade my reflections to ‘fucking ridiculous’. I hold back on the profantiy-enhanced judgement largely because Avatar isn’t solid enough to bear the insult. To label this trifle ‘fucking ridiculous’ would be an insult to the films that are truly fucking ridiculous. 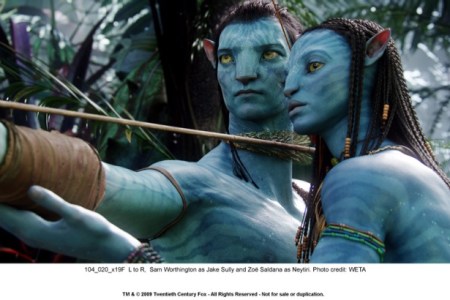 Normally a movie this slender wouldn’t even be worth mentioning, except that the specific gravity inherent in a $300 million USD price tag and the megalomaniacal boasts of its creator that it will change cinema forever warrant an appropriately slight response. So ridiculous it is.

First, hasn’t anybody else choked on the irony that hundreds of millions of dollars were spent to deploy state of the art computer technology to tell the story of a bunch of barefoot people running around in mud worshipping a tree?

I find this myth of the ‘noble savage’ to be odious. Count me in the Fox News camp on this point, but people who need to exalt the touchy-feely-one-with-mother-earth-equates-to-moral-superiority ethos have some deeply unresolved issues of personal guilt that need to be worked out, preferably in a therapists office lit with electric lights, heated by piped-in natural gas, on a comfortable sofa free of twigs, and roofed with a sturdy, rain-repellent, mass-produced shingles.

Mr. Cameron, if you find life enhanced by modern trappings such as metal alloys, supercomputers, and meals that don’t need to be chased for miles to be spiritually unfulfilling, perhaps you might eschew their conveniences in your next production.

You find me a village of tree-dwelling people living without shoes who would scorn grocery stores, the conveniences of mass production, and indoor plumbing and I’ll change my tune. My money, however, says that the majority of the developing world would be absolutely ecstatic to wake up tomorrow and find that everything around them resembles suburban New Jersey.

All things require balance, and if you can’t find spiritual satisfaction in the material world around you, the answer isn’t to take the stuff away. As the first Rabbi says in A Serious Man: “Look at the parking lot. Just look at that parking lot!” Sure, it’s goofy, but it is well-intentioned, and a much better answer than Avatar‘s position of “Damn you to hell, evil soulless gods of corporate technology, mother Pandora’s magic tree will take care of me!”

As a side-note for the nature-lovers out there, please note that nature is pretty much the exact opposite of the tender, nurturing earth mother myth. The wild is a cold, brutal place where life truly is kill-or-be-killed, where a sprained ankle means you’ve just become dinner for the next step of the food chain. Every religion has it’s dark side, but only the worst breeds of religious fundamentalism have downsides as brutal as mother nature’s. Please remember that the next time you sing fairy songs while airbrushing moons and wolves onto your formal t-shirt collection. 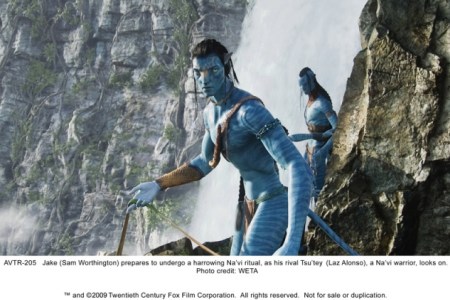 As for Avatar‘s raison d’etre is the 3D, and it’s lovely as 3D goes, but it’s just a gimmick. Take away the techno-fetishism and you have a leaden lump of a story left behind. It’s Dances With Wolves meets Giant Smurfs. Without Photoshop and a hundred million or so for ‘botanical design artists’, you have a story about as compelling as Disney’s Pocahontas, which is great if you’re a ten year old girl.The effects are groundbreaking, perhaps, but the term ‘groundbreaking’ for digital cinema has lost all perspective. The dinosaurs in Jurassic Park were groundbreaking. Bullet-time from The Matrix was truly eye-popping. But both of those effects were grounded in real, practical locations. Even the stellar effects work in The Lord Of The Rings trilogy was a staggering mix of practical camera tricks, oversized props, and carefully deployed digital work.

Avatar falls into the same trap that Lucas’ execrable modern Star Wars trilogy bungled into – when everything on-screen is created digitally, nothing is special anymore. Audiences can feel the work that goes into creating an image, and real imagery will always generate more emotional power than an army of typists inserting physically implausible waterfalls in places they don’t belong. A decade from now, the sweeping landscape panoramas of New Zealand in Lord Of The Rings will humiliate any of the epic vistas in Avatar. Projected on a big screen today, the epic landscapes from Lawrence Of Arabia or even Raiders Of The Lost Ark, will generate more awe than the meticulously rendered forests of Avatar.Simply put, most of the sweeping visuals in Avatar wouldn’t look out of place if they were airbrushed onto the side of a blue 1976 Ford van. The poster for Avatar should have a sticker that says “if this van is a-rocking, don’t come a-knocking” stuck on it. And by the time Avatar 2: Pasty-Faced Bureaucrat’s Revenge comes out, the Pandoran landscapes will look irredeemably dated. 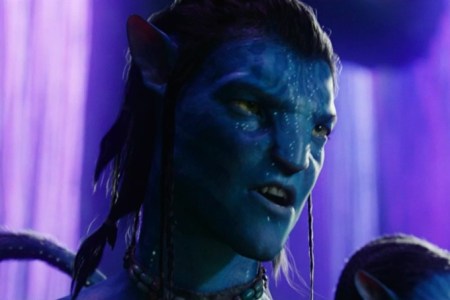 Cameron’s Titanic was enhanced by the megalithic scale. A story about one of the biggest technological follies of the 20th century, that required even larger doses of hubris to produce worked hand-in-hand with each other. The story and the meta-story fused into a moebius strip of ambition, and the result worked spectacularly well, despite the embarrassing horrid dialogue that made everybody but ten year old girls cringe. It’s a film that needed to spend $200 million USD simply to be the film that spent $200 million USD. On a $50 million budget, Titanic simply wouldn’t have worked, even if you were a ten year old girl.

Two years from now, when you flip past Avatar on FX, it’ll be little more than a novelty. If you catch Terminator, T2, or even True Lies while channel surfing, they’re all worth at least a half-hour of your time. Stumble across Avatar, and at best you’ll look at the blue-tinted weightless digitalia, and shrug while you vaguely remember “oh yeah, that was OK.” Then you’ll surf on to something far more real and tangible, like season 7 of The Kardashians.