Ladies and gentlemen, since nobody likes to have their time wasted, let’s start the official ‘best of 2009’ year-end review with the best film of the year. 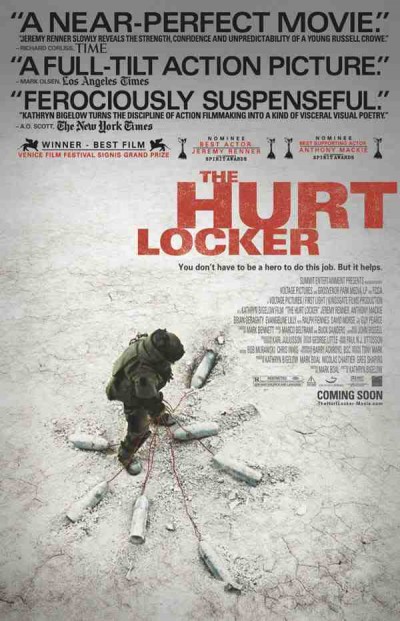 One of the few movies of 2009 to deserve every ounce of the praise that’s piled on it, Kathyn Bigelow’s story of a EOD (explosive ordinance disposal) unit in Baghdad is relentless from the very first frames and barely rests until the final fade out. It scores the best picture of 2009 award because it does two things to perfection. First, it is wall-to-wall with old-school Hollywood suspense. There’s no digital armies of zombies, or ridiculous CGI acrobatics with military hardware and indestructible super-soldiers. The whole film is wired like a bomb that could explode at any second.

Second, all that suspense is wrapped around the first truly great cinematic rendering of the Iraq war. Every other Iraq war movie to date has been a ponderous melodrama. The Kingdom, Lions For Lambs, Redacted, Rendition, and Stop-Loss were all misfires. Errol Morris’ probing documentary of the Abu Ghraib scandal, Standard Operating Procedure, got lost in the fog of war. The worst of the bunch is Paul Haggis’ In The Valley Of Elah – a film so smugly awful that words barely can describe the levels of failure in operation. 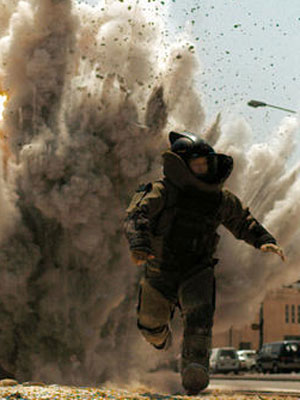 The Hurt Locker succeeds where everything else to date has failed because it refuses to explain itself. It doesn’t scold, nag, or pontificate. The decorated grunts in the EOD don’t know who they’re fighting. They don’t know what they’re fighting for. All they know is that being alive at the end of the day is victory, and nothing else matters. It works because Bigelow and her production team have created a cinematic world where everything is mundane and hostile at the same time. Shot in Jordan under war-like conditions, the heat and the tension suffuse every frame of the film. You never find out if the bystanders are curious onlookers trying to upload videos to YouTube or insurgents ready to detonate a bomb.

This is the clearest narrative picture audiences have gotten of the Iraq war, and by the time the credits roll, The Hurt Locker should make you angry. Why are we involved in this mess? This isn’t a fight for ground or for principles. It’s a war without a finish line. If our soldiers survive the day, it’s a small victory and there’s no other metric to measure progress. The intense storytelling and the immersive detail transform the nihilistic core of the Iraq war into a palpable knot in your stomach. If the soldiers doing the dirty work don’t know why they’re there, does anybody?

Bigelow is the first filmmaker to not only grasp the futility of the Iraq war, she’s the first director to transform that unknowability into a truly gripping narrative. By embracing the chaos, she gives us the first authentic narrative voice to the Iraq war. The best Vietnam movies all revolved around that same grim knowledge, that fighting in an unknowable war is an absurd experience. Putting a shiny badge of “war is bad” on a simple melodrama is an insult to the nearly incomprehensible post-modern conflict our political leaders pointlessly rushed us into. 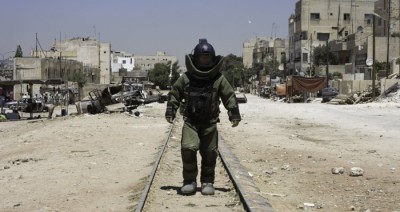 Unlike her ex-husband James Cameron’s current exercise in directorial dick-swinging (the bland Avatar), The Hurt Locker doesn’t waste a frame. The tech credits are superb – the documentary style camerwork, the immersive sound design, the flawless editing – every production department is firing on all cylinders. The whole film is one of cinema’s primal elements – suspense – stripped down to its purest form.

Perhaps the most telling thing about The Hurt Locker is that the most memorable image isn’t of the war, it’s the generic cereal aisle of a generic grocery store. After surviving the heat and the explosive madness of Baghdad, the leader of the EOD unit finds himself stumped by a wall of cartoon cereal boxes. It’s a simple image – one that Oliver Stone (among others) has tried and failed to convey several times – but here it resonates. For months after seeing it, every time I’m in a grocery store, deep in the heart of civilization, surrounded by climate controlled rows of plentiful food, I can’t help but think about all the soldiers and civilians fighting and dying for reasons that won’t be clear even a hundred years from now. We’re on the same planet, but it might as well be another world.