Commissions can be an interesting process. Some people have more input in what conceptually goes into a painting, making it more collaborative, while others allow me more freedom to come up with something on my own. Back in October I was asked to do a painting based on Fight Club. The finished piece is above, after the jump is a look at my creative process, and how I developed this piece from concept to completion.

After starting with some small thumbnail sketches to get some ideas on paper, I begin with head studies, what can sometimes be an arduous task of capturing the subjectâ€™s likenesses. 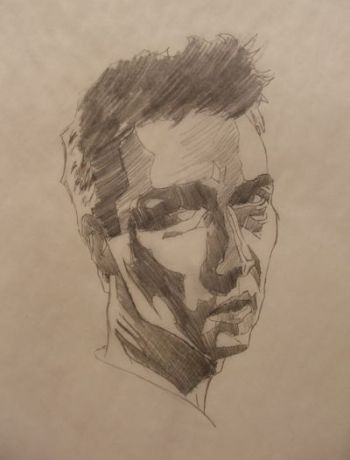 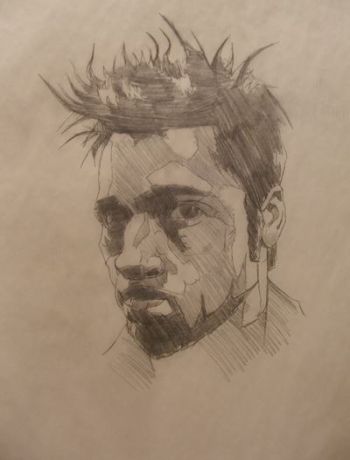 Once Iâ€™m satisfied with those I proceed with the background drawing done on paper that is of exact size the final painting will be. Itâ€™s at this point where I usually see what Iâ€™m in for. More often than not this is the stage where the most revisions are required. Walls need to be demolished and moved farther back, a table that once seemed feasible no longer fits into the composition, my eraser becoming a wrecking ball. Like a carpenter building the walls of a house and not finding them to his liking tearing them down to start over.

With the background drawing finished I can see how the figures will fit in the composition. Despite what any art class may say, I always wanted to throw Tyler Durden right dead center staring down the viewer, fitting with his nature. Marla and the Narrator positioned on either side, Tyler becomes a visual device that separates them in the same way the house acted as a barrier in my Eternal Sunshine of the Spotless Mind painting. The main three in place, I essentially dropped in the members of Project Mayhem where I felt they were the most interesting, space allowing.

The finished sketch is then e-mailed to the client for approval, with no revisions required the sketch is transferred onto canvas using carbon paper. Painting the entire surface is my primary goal. Establishing the lights and darks, I drew influence from Caravaggioâ€™s use of dramatically lighting figures in order to draw attention to them, seen in both Durden and the Narrator. Another inspiration for the painting came from Gerrit Van Honthorstâ€™s Supper Party, itself depicting a casual gathering of characters lit naturally at night. Color relationships also play an integral part. The warm reds in the foreground, such as Marlaâ€™s dress, Durdenâ€™s jacket and the bars of soap offered a nice contrast to the predominantly cool greens of the background.

The entire surface now painted, I can focus on tightening up the painting. This is the most time consuming part of the painting, requiring layers of paint to be applied before a satisfactory result can be achieved. Details such as the objects adorning the fireplace mantle or the maps the Narrator are holding are painting last.

Once again the result is e-mailed to the client for approval, and barring any changes, the commission is complete. Soon the painting is prepared for shipment, my time with the Fight Club painting comes to an end.